An attempt to run a full marathon

It was end of 2013 and I decided to run my first full marathon in Zurich. The decision scared me but I really wanted to

try it out. Was I being too ambitious? Not at all - I had already successfully completed close to 4 half marathons. Close to?? Yes, because one run was officially 3.5 km less than half marathon distance.

Why run a full marathon?

The answer is I do not know. I just wanted. During a training run on a Saturday morning in 2013 with Anindya (a good friend and running mate) I remember having said –“After this half marathon let us try a full one”.  He replied “I am happy doing half marathons and running 42.2 km is boring”. As days went by and we kept running somehow he agreed and became so convinced that he came up with a training plan

How was the training?

The plan had 6 days of training per week from mid- December 2013 until the end of March 2014 (a week before the marathon). This was a little too much.  So I personalized it to 3-4 days a week of training.  On Tuesday/Wednesday evenings, I ran back home from the office, Saturday was the day for a long run and Sunday was running with WYOP club. I have to say that getting up early on Saturday mornings for the run was no fun but it had to be done. It was a commitment to self and to my running mate- Anindya, who ran with me on most Saturdays. The mornings were cold but we kept encouraging each other. Moreover, the gossip exchanged during the runs provided an extra motivating factor. The longest distance we covered during training was 30 km. This meant all was going well, until something unexpected happened.

On 8th March 2014, one month before the race date, I went for my practice run. The target was to run 15 km.  I was having a good run till I felt a little pain in the right calf muscle. Normally during a run many pain responses appear and then disappear. This time it was different. The pain persisted. At 12 km the pain became unbearable. I did not want to but I had to stop.  I stretched my right leg and after walking a few steps, I re-started running. But the pain re-appeared. Oh!! No. This was the last thing I wanted. I hate to quit but that day I had to. I walked back home sad, disappointed and limping. A great fight ignited in my mind between the negatives and the positives. The negative was telling me that I was trying something of which I was not capable. The positive was telling me – ‘Better listen to your body, this is not the end of the World, you tried your best, just take some days rest and you will be fit again to run’.

To speed up the recovery I visited physiotherapists and did all the recommended massaging, stretching and dry needling. I was recovering but slowly. The marathon day was closing in but the pain was playing tricks- the pain areas were shifting.  I kept telling myself “I will run”. I have heard that with a positive attitude healing is accelerated.

Did I start the race?

On the evening of 5th April I went and collected my bib and the marathon goodies. On returning home, I was still not sure. That night, I wrote to my Physio friend- Junaid Azmuth “Do you think I can start the 42.2 km run tomorrow. I know you won’t recommend it but my heart says start. If you happen to see the mail tonight, I will be happy to know what you think.” A few minutes later Junaid replied “Hi Indranil, I wouldn’t recommend it. You run and you will damage it long time”. Junaid knew of my injury from day one. I was following his exercises to recover. He is highly experienced, has trained Olympic athletes and in 2012 he helped me to recover from my knee injury. So should I listen to him?

That night when I went to bed I took the decision. I decided not to start. Nonetheless, next morning I was at the running area. Not to run but to cheer my other friends who would run to raise money for Asha Zurich to support child education in India. And most importantly to cheer my running mate – Anindya. I wanted to see him start. Before starting he said “It will be really boring running without you but the next marathon we will do together”. We hugged and off he went. And yes he finished the race- graciously. I was proud to run (limping) a few 100 meters with him at the finishing stretch of his race. Man, I was emotional.

A bib that never started the race 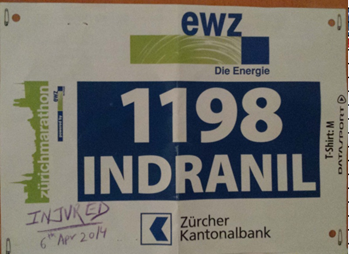 Now it is July 2014. From March to June, I kept asking- Will I be able to run again?  When?  I did no running. I just could not due to the pain. However, I continued with stretching, went to the fitness center and biked.

On the evening of July 2, 2014, I felt like going for a run. I was a little skeptical as it has been almost 4 months. Anyways, I proudly wore my running shoes and ran through my most familiar track around the Katzensee (Katzen lake). All the time I kept praying “God, no pain please”. The trees and the tracks all looked so familiar. I missed them and I felt that they were asking where I have been all this time.

The run after 4 long months 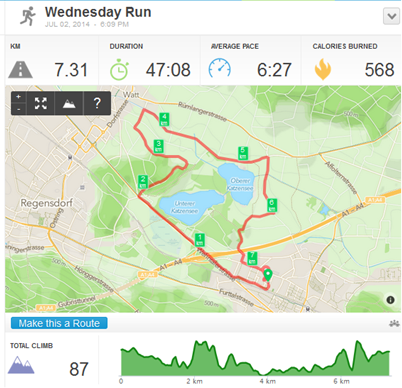 Indranil would like to thank all friends and colleagues who supported him morally during this phase in particular his wife and his sister.  His mother still thinks he should quit running and start walking more.