Have I found my passion?

I turned 50 years last December (2013). My native place is Chennai and I am residing in Singapore with my family (two daughters).

How and why I started to run?

One of my friend casually mentioned during a bowling session that she ran 10 km.  She is in my age group.  Immediately on April 23rd, 2013 I signed for a run on June 1.   My very first training run was 2 km and soon after the run I realized that I made a mistake of registering for a 10 km run in 4 weeks.  I thought I hardly could do better.  I started to read about running in net, learned what is gait, selection of shoes and how to progress

Sundown marathon 2013 - around 40,000 runners. The feeling during the race could not be described.  The body was trying to understand what the muscles were trying to do, the heart and the lungs were pumping to cope up.  Higher I went they too followed me which is called conditioning.  I did my run (10 km) in 67 minutes.  At the end of the run I felt very relaxed. Probably I was addicted.  Good to get addicted to good thing is in it? 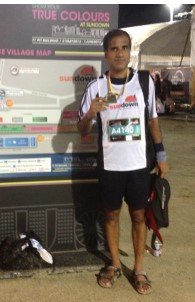 A runner never stops.I started to push my time below 50 min and thought of attempting half marathon.

I ran my first half marathon which happened to be my personal best 2 hours 8 minutes. I was in the sky when I was able to run not stop.

When I ran my 2nd half marathon I developed a knee pain. However I managed to finish in 2 hours 27 minutes.

During a family trip to Chennai, I signed up for a half marathon called Dream Runners Half marathon. Around 10,000 runners ran. I was delighted to run in my native place with my own people. I was praying that the old knee pain should not come up. For more than half of the distance there was no pain. As I crossed the 15 km mark at 1 hour 25 minutes my knee pain surfaced.  Slowly I finished at 2 hours and 22 minutes.  But it was nice to run along Marina beach.  Enjoyed. 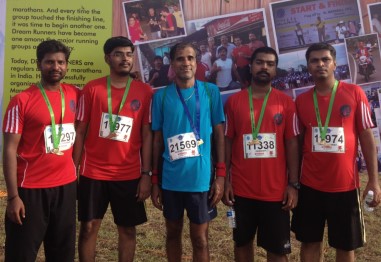 Am I able to recover from this knee pain? At times I get a bit dejected. I started to browse running forums. I found that stiffening of Iliotibial band (ITB) triggers pain near the knee area. Since then, I am regularly doing ITB stretches and now I am feeling better after long runs.

I ran another half marathon in Singapore which is called SAFRA Run 2014.  Cautious about pushing hard and waiting for knee pain to surface, but my ITB stretches helped me.  With a little bit of caution I finished in 2 hours and 12 minutes.  I was very happy to finish confidently. 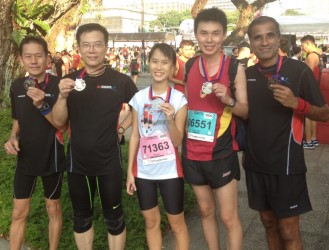 When my 50th birthday was in sight, I was thinking what is going to be my passion in the coming years when I grow 60, 70 etc.  The running bug caught me without my knowledge. My ambition is to keep running half marathons to my level best and at 60 years to run 10 km in 60 minutes and at 70 years to run in 70 minutes.  I know it is easier said than done.  My interest should sustain, along with my health and more than that God's blessing.  But more than anything, in our heart if we feel we can do it we will keep doing it.

It is so difficult to balance the time between profession, family, social commitments etc. Sometimes I am too tired when other things drain our energy.  In those times it is important to slow down and allow the mind and body to recuperate.

BUT SOMETIMES I FEEL I SHOULD HAVE STARTED TO RUN AT LEAST 15 YEARS BACK.