Meeting the Ironman from India
On August 13, 2014 by Indranil 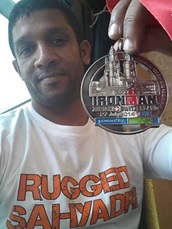 I met Akash while volunteering at 2014 Ironman race in Zurich. 14 hours into the race and he was running and passing me for the last time. He appeared tired but determined. There was still a few kilometers to go (around 7 Km) till the revered “Finish Line” and I joined him for the rest of his race. I learned a bit about his interesting journey- from Kolhapur, Maharashtra in India to the Ironman race in Zurich, Switzerland, which I found absolutely fascinating. So here is an open talk with Akash.

WYOP: Akash tell us about yourself?

Akash: I am 29 years. I live in Kolhapur. It’s a small city between Mumbai and Goa. I have completed my MBA from Pune University, India and after that I joined my father’s business. I am married and have two kids. I live in a joint family with my parents and younger brother.

WYOP: Why did you decide to take part in one of the toughest races in the World- Ironman?

Akash: First of all, the name Ironman is very attractive.  I heard about this race from Dipankar Paul, an Ironman, who came from Bangalore to Kolhapur to take part in an adventure race. He introduced me to Ironman. When I heard about it, I felt it was really challenging. I was anyways doing weight training and other fitness exercises. So I decided to take a shot at it.

WYOP: In 2013, you came to Zurich to take part in the Ironman race. You competed but could not finish. Can you tell what exactly happened?

Akash:  I was unable to finish swimming and cycling within the time. I was 7 minutes above the time limit. So I was not allowed to run. In 2013, my preparation was not that well. Moreover, many concepts were new and I was not aware how important the diet is for such a race. Swimming was not my strong area. I started swimming 6 months before the race date and it took me 2 hours 8 min to finish 3.8 km swimming. Moreover that day in Zurich it was very warm and 180 km of cycling was tiring. So it just did not happen.

WYOP: You came all the way from India to compete in the Ironman. So when you came to know that you can’t finish the race - what went through your head?

Akash: My dad always wanted me to be a sportsman. I played badminton in school and then afterwards I went to college and did not continue. So when I could not finish, my dad’s face appeared before me. Moreover, lot of money was spent to participate in the race in Zurich - flight costs and everything. It was an expensive affair. But more than money, it was an opportunity for me to make my father happy after many years and that did not happen.  It was just because I was 7 minutes late! It was not that I was very tired after 180 Km of cycling. I was fit. I could have run the marathon distance. If not running, I could have made the distance walking or crawling. I still had lots of strength. I felt bad. Tears were coming down but I did not want to show it to others. But yes I was emotionally hurt.

Akash: This time I completed swimming in 1hour 46min. Swimming and cycling I finished in 9 hour 10 min. So I knew I had lot of time for the marathon. Finally, I finished the race in 15 hour 17 min. My dad and my family everyone is very happy that I finished. My dad is telling me that he wants to gift me a better cycle. But I am telling him not to do as already there have been lots of expenses. 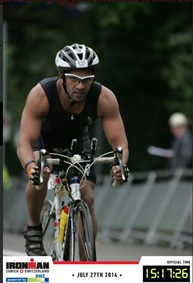 WYOP: Can you tell which phase was most difficult for you?

Akash: Swimming was the most difficult because I had no background. I also had no experience to swim with a swimming suit. Seven days before the race, I rented a swimming suit in Zurich. I trained with the swim suit for 15-20 min in Zurich. So during the race, 20 min into the swim, my hands and legs got tight and I felt suffocating. Anyways when I finished the swim in 1hour 46 min then I had the confidence that I will be able to finish the whole race.

WYOP: What was going through your head throughout the race?

Akash: There was definitely lot of tension. There was lots of expectation. But I had only one aim - to cross the finish line to make my family happy. That’s all. My elder son had a birthday. I wanted to gift him the medal.

WYOP:  Without proper training it’s difficult to be an Ironman. So tell us how did you train?

Akash: Training is a major issue here. I did not get proper guidance, especially in our Kolhapur area. In Zurich when I was training with Ironman Nikhil Kapur, the only other Indian who finished the race with me this year in Zurich, he told me that I was using lot of strength. I am thinking that next year  I will hire a coach so that I can perform better.

WYOP: How did you train for long distance running or biking?  I know heat is major problem particularly in summer. If you are not starting early in the day to train it can be an issue. Moreover, it may sound funny but street dogs are an issue while running. How did you tackle all these? I know in Europe this is not a problem you can go anytime you want to train. But in India, you really need to plan. So how did plan your training?

Akash: For running and cycling I went during afternoon. In 2013 when I was in Zurich it was hot so this time I thought of training in similar conditions. As far as swimming is concerned, there are very few swimming pools in my home town. To find place in the pool I had to go at 6 am otherwise it got crowded. Moreover, natural water bodies here are dirty and are not suitable to swim. In the afternoon the pools are closed therefore I had to organize my training like swimming in morning and long distance run and biking in afternoon.

WYOP: You came all the way from India to take part in the very tough race. How did you take care of your finances? Moreover, the registration cost is expensive it’s around 700 Swiss francs (47,000 Rupees). Did you look for some sponsors?

Akash: No my dad supported me. In India it is difficult to get sponsors as not many people know about Ironman. My dad was happy to support me. My bike is not of good quality. The participants had great bikes; if I had a better bike then I could have finished with a better timing. In 2013, when I returned without finishing the Ironman, my dad told me not to worry about money. He asked to me compete again and told me not to worry about the finance. This gave me confidence and was a great motivating factor.

WYOP: That’s incredible if you have someone who supports you. And today you have made your father proud. Akash, it was your determination that you finished the race but I am sure there must be many who supported you in this journey.

Akash: Yes offcourse. I want to thank my swimming teacher- Nayar Sir and Nimbalkar Sir, they gave me the confidence that I can swim.  That was really important because I had no confidence to swim. I want to express gratitude to Ironman Dipankar Paul and Kaustabh Radkar (8 times Ironman). They guided me over telephone. I also want to thank Nikhil Kapur who participated with me in the Zurich Ironman. Thanks to Rugged Sahyadri family for motivating me. And lastly my family- they gave me everything from financial to emotional support.

WYOP: Akash now you are an Ironman. What’s next?

WYOP: Akash, thank you very much. You are indeed very inspiring. Keep inspiring. 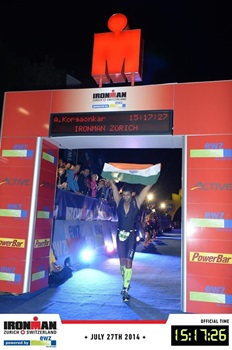