Our 7th WYOP Run - Fotos
Blog
Running my first long distance event on homeland in India!
On February 13, 2017 by Dipankar

Running my first long distance event on homeland in India! 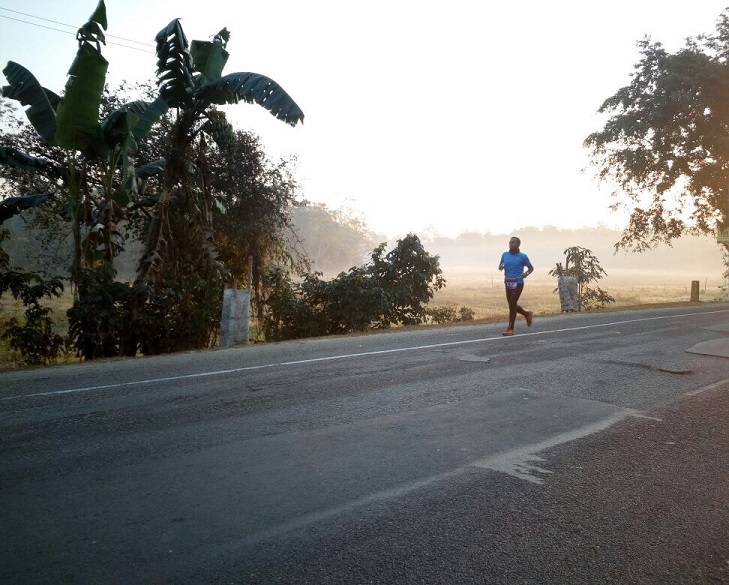 Just after landing amidst the hustle and bustle of India for my vacations, after been away for more than a year in pursuit of my PhD at the University of Bern, Switzerland, I fell sick! I caught a bad flu! All I remember doing for the following days was carrying a big towel and sneezing around. I did not realize what went wrong? Why my immunity dropped so bad suddenly in a place which is not even as cold as Swiss summers? I am a 3-times marathoner and clock an average of 240-390 km running per month! My immunity should not at all be an issue, especially when I can run at -6 degrees in just a t-shirt and shorts! Probably I became too Swiss over a year! Anyways, the flu was not my concern, my biggest concern was if I will be able to run the half-marathon at Numaligarh, Assam in a week’s time, which I promised to run for Asha Zurich in an effort to grab the opportunity to make that region aware of Asha’s activities toward underprivileged children education.

Numaligarh is famous for this traditional tea garden, and these are the places where people from the local tribal community (known as ‘Coolie’ in Assamese) does labor works. The young ones of this community have exceptional athletic abilities, and I myself witnessed it during my run. Unfortunately, they lack scope of proper education to be guided with. This was therefore a good opportunity to reach these people who in-turn could seek support from Asha

The D-day was on 22 January, 2017, and I started my journey to Numaligarh from my home at Guwahati, the day before. It was such a pleasant opportunity to be backed up by my family. Mom, Dad, Chotu (my sister), and Baba (my cousin brother) accompanied me in this trip. I always shared my running experiences throughout the world with them, and they were as excited to see me running as I was to run in their presence. After driving 250 km we lodged a hotel at Golaghat, close to the event’s starting point. I knew that my preparation for a running event in India was not going to be as disciplined as it is in Switzerland. Especially concerning my diet. Since I arrived, akin to a typical Indian mother, my Mom just kept me on a ‘healthy’ Indian diet of her choice, and not to mention all the similar unavoidable lunches and dinners I had at my relatives’. I already felt an additional kilo or two in my body! Although this additional weight was good for the race, but the oil and masala I had with the food was certainly not! After another proper Mom Friendly Indian dinner with “Paneer masala”, I took an early nap to give my sick body some rest for the torture that I was preparing for it the next day.

Finally, it was the race-day, and I was still reeling from the 102 degrees’ fever I had couple of days back. As usual, I geared up, hooked the race bib to my gears, and we drove early morning to the starting point of the race. Like the inhabitants of a typical rural place in Assam, the locals were quite early risers and the starting point was thronged with people in no time. Athletes from Assam and local celebrities took the opportunity to pump up the crowd and runners with motivational speeches! I heard one of the weirdest announcements before any running event while warming-up. It was announced that all the runners should gather and take an oath to abide by the rules of the race. Seriously!

When the clock stuck 0610 hours, the race began and I went in a trance! It was time to know how well my already stressed body can perform in couple of upcoming stressful hours. More than the body, I wanted to know how my mind would respond. Afterall, long-distance running is a mind’s game! Prior to getting sick, I aimed a PR (a 1:40 finish) for 21.1 km in this race, but now it was all about enjoying my run, finish it, and fulfil the motive behind it. The feeling of running on your home soil amongst your fellow countrymen itself is unexplainable! Running through agricultural fields and tea gardens with the sun just up in the horizon, and soaking those first rays of sunlight through the fog was simply mesmerizing. Unlike the “hop-hop” cheers from Swiss crowds, the locals here cheered us with “Hurry-up”! It was a pleasure to see the enthusiasm of running amongst the people. First half of the race went well, but things started getting a little nasty after that, and I felt a much weaker. I made sure of hydrating myself throughout the race. Although, the organizers made good arrangement of hydrating the runners at necessary points, but it was pity to see how they were unable to manage the waste of plastic water bottles after that. I wonder how long the bottles lay there after the event, if not the locals took care of them! I interacted with some amazing people while running including couple of ladies (probably in their mid-seventies), and a retired army colonel from Gorkha Rifles (with whom I talked about his plans about arranging an ultra-run in the Himalaya range). I clocked a 1:53 finish! Not that bad when I was not that good! Ah, come on, I finished ahead of the Gorkha atleast! 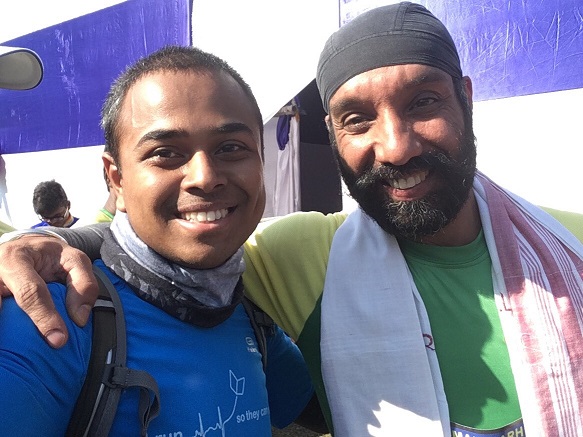 After the event, it was an honor to meet Major D.P. Singh, India’s first blade runner, who came to flag-off the event. I have been following this guy since some time now, and he is an inspiration. I was grateful for the way he appreciated my passion toward running, especially the causes I run for. Afterall, a runner understands a runner well!

Although, the race was not so well managed, still I must say that it is one of the beautiful runs I ever had. It was great to see so many women taking part in the event. I saw amazing talents of long-distance running amongst the local tribal youths, but all they lack was proper training. I was pleased to bring Asha to these people, endeavoring to help these talents achieve their rightful places. Hope to run many more distances in India and around the World, and for the noble efforts of Asha Zurich. Ciao till I narrate my next adventure! 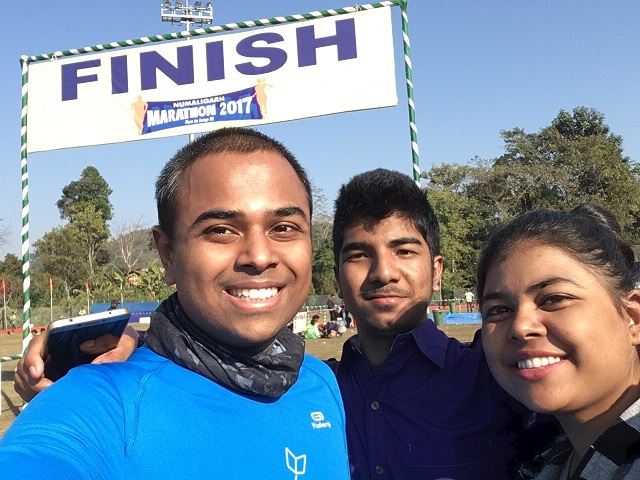